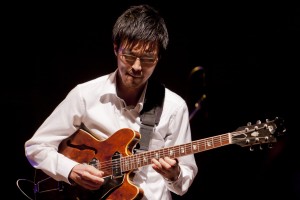 Daisuke Abe(guitarist, composer)
Daisuke Abe has become a highly sought after guitarist since his arrival to New York City in 2002. “An accomplished player with a penchant for penning appealing melodies,” (JazzTimes, February 2006), Mr. Abe also handles his instrument “…with a deep sense of tradition, and more importantly, consistent expression,” (DownBeat, April 2013).

During his time in New York, Daisuke Abe has been very active as a performer and recording artist. His debut album, “On My Way Back Home” (Nagel-Hayer), was released in 2005. This album features nine of his original compositions and a heavy-weight lineup including: Aaron Parks (piano), Walter Smith III (saxophone), Gretchen Parlato (voice), Matt Brewer (bass), and Rodney Green (drums & producer).

In 2008 Daisuke Abe launched a new band, which he co-leads and produces, UoU, a quintet made up of members originally from Japan. UoU’s debut, “Home” (Tippin’ Records), was released in 2010. “This debut exudes a polished distinctiveness, clear abilities and original compositions,” (AllAboutJazz.com, September 2010). “Home” also notably climbed to #1 for two consecutive weeks on the JazzWeek World national radio charts.

Daisuke Abe followed UoU’s debut with its second release in 2013, “Take the 7 Train” (Tippin’). “One of the most adventurous young bands that is auspiciously exploring jazz with its national heritage in mind is UoU,” stated Dan Ouellette, DownBeat journalist.

Daisuke Abe’s musical journey began far from New York City. He started playing guitar at the age of fifteen in his hometown of Tokyo, Japan. His first jazz studies came when he attended Senzoku Gakuen College in Yokohama, Japan, where he graduated at the top of his class in 1999. He then relocated to the USA attending the Berklee College of Music in Boston, Massachusetts upon receiving their World Scholarship. Mr. Abe graduated in 2002. During his time at Berklee he studied and performed with master musicians including: Hal Crook, Tiger Okoshi, and George Garzone. In 2001, Berklee presented Mr. Abe with the highly prestigious Louis Bellson Award.